Ayurveda is the oldest medical science known to the world. It originated in India more than 5 thousand years ago and its written source is the Vedas, a famous collection of ancient wisdom texts considered to be the oldest writings of the civilized world. 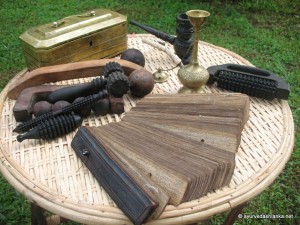 Knowledge of the existence of Vedas in their oral form dates from several thousand years before the appearance of the written version. The first Ayurveda teachers discovered the major health principles that are now the foundation of Ayurvedic medicine and passed their knowledge to apprentices by word of mouth.

As time passed, the wisdom of the Vedas found its way into the written world, the texts being written Sanskrit, an ancient Indian language. The Ayurvedic knowledge scattered in the texts of Vedas was collected by Ayurvedic specialists and made available to the world.

Ayurveda is actually a Sanskrit word that combines two words: Ayus and Veda (Ayus – life, Veda – knowledge, science). In other words, Ayurveda is the Science of Life.

Ayurveda defines the concept of life as the harmony between body, mind, emotions and spirit. This proves that it is not a medical science limited exclusively to the physical body. Its goals don’t revolve only on administrating proper medication and the elimination of symptoms of illnesses. Ayurveda is a philosophy of life that helps us restore and maintain a natural balance of body, mind and spirit.

Although this science has been popular in India for thousands of years, Ayurveda is not limited to the Indian world. It is a universal science. Thus, Ayurvedic knowledge is widely spread on our planet. Theory and schools of Chinese, Arabian, ancient Greece and Roman medicine were based on Ayurveda theoretical statement. The modern Western medicine too has embraced Ayurvedic ideas along with many alternative health disciplines that emerged recently, such as homeopathy, naturopathy and aromatherapy.

Find out more about Ayurveda in Sri Lanka at our Ayurveda Resort.