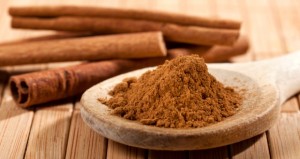 This familiar inhabitant of our kitchen cupboards is made from the dried inner bark of the cinnamon tree, native to Sri Lanka where it has been highly prized for thousands of years, in fact at times it was more valuable than gold.

In Medieval Europe cinnamon had a reputation as an aphrodisiac, a strengthening tonic to dispel fatigue, melancholy, winter lethargy, poor circulation, impotence and nervous problems and a remedy for coughs and sore throats.

What are the healing properties of cinnamon according to Ayurveda?

Half teaspoon of cinnamon per day helps to lower cholesterol level.

Cinnamon is expectorant for your lungs. It's pungent spiciness warms up the lungs and liquefies mucus congestion. To treat cough/ bronchitis: Mix 1 teaspoon of cinnamon, turmeric, ginger, black pepper, cardamom and clove. Add 3 tablespoons of raw sugar and grind together to make a fine powder. Take half or 1 teaspoon of this powder mixed with honey twice a day.

Cinnamon is a popular garnish atop many desserts. Cinnamon regulates blood sugar and its stimulating pungency makes it perfect for heavy, sweet foods. Cinnamon also regulates metabolism of fats and sugars, helping with type II diabetes and insulin resistance.

Cinnamon's taste freshens the breath. Natural anti-microbial properties in cinnamon cleanse the mouth, addressing the root cause of bad breath. Its stimulating fresh taste can also be used to quell nausea and stop vomiting. As an analgesic cinnamon is useful for toothache. Just take a pinch of the powder and apply directly onto the tooth.

Like most pungent spices, cinnamon rekindles digestion. It is advisable to take a warm cup of tea or milk with a teaspoon of cinnamon after a meal. For people with heartburn, it can be used as a post-meal digestive aid and in stimulating weak digestive tract. At the same time, it hinders the formation of excess stomach gas.

Cinnamon treats nervous tension and insomnia. Add half teaspoon of cinnamon powder and 1 teaspoon of honey to 1 cup of warm milk. Drink it before going to bed.